Elias Johansson won the Swedish summer series Rd: 3. Congratulations kid.
Powered by Scorpion RS-3420 7.5T.
This is the round 3 of the summer series was held at the Årsundaring. The track is quite fast with off camber jumps, and a huge wal-ride. The turn out was good and the the runner up at the Nordik Campionship was attending, Swedish Nationals podium finisher was also attending! As the weather was extremly hot the Astro temperature rised above 50deg and a complet new setup was needed. We removed all weight in the front of the car and made several big changes to the suspension. After the two practice heats it stood clear the setup was spot on! Qualification: As the Serpent SRX2 MM was werry good to drive I knew I could set some good result just driving safe…. I managed to win all Three qualifications with a safe margin…. Mains:
A1 The start was not spot on but I could soon put a gap on the rest of the field, the car worked even better with fresh tires, at the finish line I was the only driver to manage 17 laps : )
A2 This time the start went a bit better and I could gap the field, the driving was abit more sloppy but I was 18sek in front of second placed car as the buzzer went , with two Wins in the bag all pressure was gone and I was extremely happy to lock down a Winn…..
A3 I hesitated to start in the 3:rd final, but I was to fun to drive so I decide to race. Made a good start and second placed car landed on the roof after a tricky off-camber jump, With a good distance to the other cars I was able to drive my own race , putting in some fast laps. This run was the best of the day. Again I was the only driver running 17 laps. The car: Serpent has produced a extremely balanced mid motor car with the SRX2MM. Another impressive thing is the durability, both parts and drive-train is rock solid so I feel no need stocking lots of spare parts.This car runs A-mains right out the box. Conclusion: Arsundaring is a fun track and is hosting Another race later this moth…I`m looking forward to it!!!
Thanks to Hobbyprodukter Sweden and Scorpion Power System Rc for the support!! 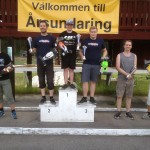