Lee Martin just finished the BRCA Round 2 – TORCH
The below is the blog from Lee Martin.

Rain was threatening the day but we were lucky that only a small amount appeared and only affected a couple of races (unlucky for them). I was running my Yokomo YZ-2CA with Scorpion 5.5 motor with the timing increased as the track was quite fast and required a lot of motor down the long straight away. The thing with some types of Astro is that it has more resistance than carpet and you can feel like the car is not producing enough power with the same settings.

TORCH is a great track that is quite mutual and pretty easy to learn and master, which is lucky as after 2 x 3 minute practise runs, it’s straight into racing. The track was being run in the opposite direction to normal with a completely new layout with just a few familiar jumps. I would tune the ESC during the day to get the optimum settings come finals, increasing the turbo level and punch and decreasing brake frequency as the end of the straight was a hard braking area and required a lot of force to get the car slowed down in 2wd, as the cars only brake with rear wheels they can often feel like they need more brakes and a lower frequency can help to apply a more aggressive stopping motion.

After qualifying I would be lining up 2nd after TQ’ing 1 round and coming 2nd in 2 of the others. It was very tight at the top and the finals would be very close, taking the win in leg 1 and 2nd in leg 2 would set up a battle for the win in the 3rd leg. I would get into the lead after around a minute, but a traction roll at the end of the straight lost the position and I was back into 2nd and chasing hard. For the final 2 minutes I was not separated from the leader by more than a second and crossed the line only 0.4 behind…. But behind I was, which meant I had to settle for second. (Unhappy face)

The next day it was 4wd time, the track had been changed in places to make a new layout for the drivers and ran the same schedule as the 2wd event. After practise 1 I realised that I needed more horse power and went from a 5.5 to a 4.5 and increased the turbo to 30 degrees. Round 1 went well and I was able to take the top spot but still in need of more power I turned up the boost as well, now at 30 degrees for both. This really improved the acceleration and felt like the car was ready to go. I would take another 2 TQ’s and secure the top spot.

One great thing about the Scorpion Vanguard system is that it logs all of your run data, so after the runs were complete, I could log into the ESC and check the temperatures that the ESC and motor had been running at and make sure that the car was in a safe zone and was not going to overheat in the sunny UK weather!

Happy with my package I would head into the finals confident and this showed by taking the win in the first 2 legs to secure the overall TQ and Win and take the championship lead.

The first win for Scorpion Vanguard ESC and Motor in the UK National championship and hopefully with many more to come!!!! 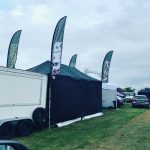 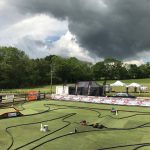 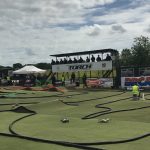 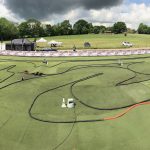 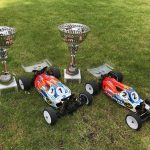