Boughton, a Astro turf track in the Mid East of England. Although not your usual Astro track as this one has no traction! It’s almost like dirt, where you have to drift the car around the track to produce good lap times while still being able to achieve forward traction. The Track also had a huge straight, so you needed the car to be smooth at low speeds but have good top speed.

I used the turbo more than the boost to achieve this and adjusted the brakes to a higher frequency to allow for a smooth braking action.

In the 2wd class I would struggle to find the right set up and everything I changed to give more traction was actually going the opposite way. In hindsight I now understand why it was doing this, but at the time I was blinded and as we only get two practise runs at 3 minutes each, there is not much you can try!

Having never been to the track before, each run was a lesson and a steep learning curve.

I would qualify and finish second on the day, but I just didn’t get close enough to the win for my liking! For sure if we go back here for a national then I need some testing time!

4wd we were using the new prototype yokomo car again and it was the first time on low grip. Initially it was difficult, with the car being hard to drive and generally had no feeling. The electrics were running very warm again. Due to the long straight and being constantly on the power getting the car to move and drift through the turn. I cut the body out more to provide as many air holes as was possible to aid the cooling.

By the end of the day I really got the car working well. Learning a little from 2wd and going the opposite direction on set up I got to a point where the car was producing fast lap times and was noticeable amazing at jump landings. I would get close to taking the lead in leg 2 and would win leg 3, but it wasn’t enough.

I didn’t have the best weekend as I would end up 2nd again but once I worked out the set up I showed some great pace with the car and electronics!

Next up it’s the euros! Time to knuckle down and concentrate! It’s go time!

BRCA national R5. Southport.
Started as a wet race but ended as a dry and grippy one with a fun layout in 2wd. I was able to come close to TQ and then power to the win after some tight and fast racing!
4wd was a slightly more testing layout and again coming close in qualifying but this time had to settle for 2nd in both qualifying and the main! Had a early mistake in leg 3 and ruined my chance after winning leg 1 after another intense battle. Learning more and more about the prototype each outing, but I really need some testing time to fully dial it in. I will make sure I get some test days in before R6!
Thanks to southport club for all the effort all weekend and the weather for being generally better than expected!
Now to drive 200 miles home and get ready to board a flight to Sweden in the morning for the 1/8th euros!
Thanks to sponsors as ever! 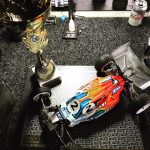 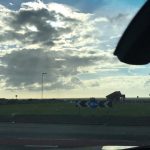